“This beer right here is the best beer made in America.”

Meet John Berretz… a transplanted Westsider who now lives up the street from our taproom. Lucky guy.
You can often find him leaning against the bar these days, enjoying a cold pint of Bohemian Special Brew. 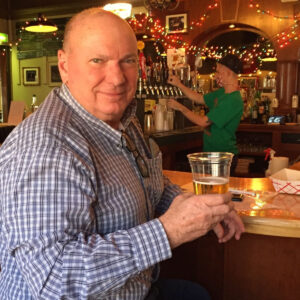 “This beer right here is the best beer made in America,” Berretz told me recently. As a long-time beer drinker, homebrewer and former bartender, he should know. And at a time when the world seems turned upside down, it’s nice to see someone who takes time to appreciate the simple things in life.

I’m reminded of the year my wife and I spent in Prague in the early 1990s, soon after Eastern Europe was freed from decades of communist oppression.

We stayed with a Czech family – Frank, Jane and their two teenage sons — who basically adopted us. They took us along wherever they went – to the mountains up north to ski, to the mountains down south to camp, and to lots of friendly Czech pubs (hostinec) to enjoy the best beer in the world. Our Bohemian Special Brew is our tribute to that.

But more so than their great beer, what I really came to appreciate was the way the Czechs had coped with the repression they were stuck with when the Soviet Army “freed” them from their Nazi occupiers at the end of World War II.

They eventually threw out the communist regime – and many brave men and women suffered and died doing so – but in the meantime they did not let their oppressors define them. Life went on, and they still took the time to appreciate its simple pleasures, including that great beer and their families and friends.

These aren’t simple times. And there are many things that still need to change … too many things after too many years.

I wish we had the answer – we know it isn’t violence – but in the meantime Wiedemann’s will continue to offer people refreshing cold beer to relax and reflect with among family and friends. Including John Berretz.