Our latest release and first collaboration beer: WeZen, The Juice

Our brewer, Steve Shaw, explains how our latest beer release came about. 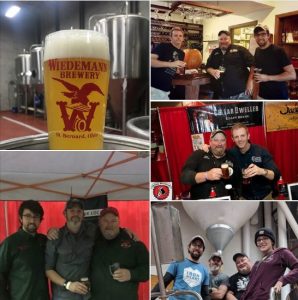 “WeZen The Juice” was named because of the meaning of Zen, which is “living in the present and experiencing reality fully.”

The name came about because We as Sean Willingham, Austin Smith and I are living in the present and experiencing reality fully — fulfilling our dreams of being able to do what we truly love: brewing beer for a living. The three of us are great friends, brought together by our desire to brew beer.

Sean was the first person I hired to work with me as a brewer. I hired Sean for two reasons; he was willing to work for free and he had a great selection of music on his iPod. Instantly a great friendship was born. Sean and I worked together for three years when, one day, Austin walked into the brewery and offered to work for free, too. He also had great taste in music, so that started the relationship between the three of us.

Shortly after Austin started, Sean went one to work with his team to build and open Municipal Brew Works in Hamilton. Then Austin and I came to Wiedemann together to build the new brewery with Jon and Betsy Newberry.

It’s been close to three years since all of us brewed together. We talked for many months about working on our first collaboration. We decided to brew a New England Style IPA because it’s a beer none of us had ever brewed before and we wanted to step away from our comfort zone a little.

So, WeZen The Juice, was born. I hope you enjoy the beer as much as we enjoyed being back together in the brewery again.

This entry was posted in Uncategorized. Bookmark the permalink.